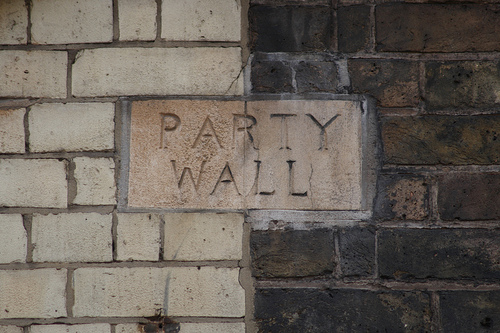 Party Walls separate two buildings owned by two different people e.g. terraced or semidetached properties would share a party wall with their neighbours. The definition of a Party Wall is sometimes extended to include garden walls which are built along a boundary which are known as Party Fence Walls.

The Party Wall etc Act 1996 is designed to permit owners to carry out certain works whilst protecting the interests of the owners/occupiers of the adjoining property. It stipulates that property owners conducting works must notify neighbouring owners in writing of the works to be carried out. If the neighbour does not agree with the works to be undertaken a surveyor is required to dictate how the works are to be done and in what time frame.

There are certain works which a property owner is required to notify neighbours of the works and attain written consent from the neighbours which are listed below:

If you wish to partake in any works covered by the act on a Party Wall you must give neighbours a minimum of two months’ written notice for works to be carried out on a Party Wall and a minimum of one month’s for excavating foundations. Property owners must get a written agreement from neighbouring property owners before carrying out works covered by the act.

Where a written agreement is not given within 14 days of the notice being served the property owners must appoint an agreed surveyor or appoint a surveyor for each party to act impartially for them. The Surveyor/s will then draw up an Award which details how the work will be done, in what timeframe and who is liable for the costs of the works.

Lyndon Brett Partnership are experts in dealing with matters arising under the Party Wall etc., Act (1996) and frequently represent both Building Owners and Adjoining Owners to ensure a satisfactory outcome is achieved, whether acting for the Building Owner alone or as Agreed Surveyor.